Deep Secrets of the Earth

The Zero Dawn Project Facility is a ruin of the Old Ones in Horizon Zero Dawn, located beneath the city of Sunfall.

During the 21st century, the facility was the main development site for the Project Zero Dawn team until their relocation to GAIA Prime in January of 2066. The location, a spacious decommissioned Orbital Launch Base outside Bryce, Utah, was secured by General Herres for Dr. Elisabet Sobeck to begin recruiting candidates to Project Zero Dawn.

Because of the top secret nature of Zero Dawn, most candidates who were brought to the facility arrived confused and frustrated with no knowledge of the reason for their summons (in some cases they were all but kidnapped by special forces and covert operatives under Herres' direction). Also due to the extreme sensitivity of the project, any candidate who learned the details but chose not to participate was not allowed to leave the facility and forced to choose between medical euthanasia or "indefinite detention."[1]

Following the disappearance of Sun-King Iriv in the West, his successor Basadid ordered the construction of a fortress built at the edge of the Sundom. Basadid chose to build this fortress, which could to be known as Sunfall, atop the ruins of the Zero Dawn Project Facility, believing that the location was chosen for strategical value. Much of the facility was either collapsed or built over: the exception was a massive stone ring, which came to be Sunfall's Sun-Ring.

The first part of the facility contains a reception area, a lounge, and two holo-theaters for briefing the candidates on the mission status through hologram presentations. There are also medical suites for treating candidates overcome with emotion or opting for medical euthanasia, as well as a morgue and two crematoriums. One of the crematoriums is opened and becomes the entry point into the facility once the quest has been completed.

Further into the site are work areas for each of GAIA's subordinate functions along with an individual office for Dr. Sobeck housing GAIA herself. Dr. Sobeck's office was designed with a large glass wall overlooking the labs.[2] The Alphas recorded hologram messages for their laboratories to welcome candidates and explain their programs' purposes.

HEPHAESTUS laboratory contain a prototype of the magnetic transport line that is found in cauldrons, with diverse parts strewn around the lab. There are also multiple prototypes of cauldron fractal stone structures in different states of formation. One of these elements can also be found in the antechamber of Elisabeth Sobeck's office. In her main office, there are two small models of key elements of the project: an ectogenic chamber and an AI core. Both those models cannot be found, however, once the quest is completed, since the furniture in the office is blown away.

"Hello! I’m Margo Shĕn, and this is HEPHAESTUS! As the name might tip you off, this is going to be the subordinate function that GAIA will use to make lots and lots of robots. Her personal forge… except it’s not that simple. Um. So, like, you probably noticed that only about a third of you are robotics engineers. The rest, experts in machine cognition, virtual heuristics, that stuff. Well, that’s because we aren’t going to be the ones designing and building robots. The last thing we want is to burden GAIA with a bunch of outmoded twenty-first century designs. Waste of time! Our purpose is to empower GAIA to build the robots. And not just build – imagine – from scratch! Any robot she needs, for any conceivable purpose, designed and fabricated at a snap of a finger. Hers. Her finger. So HEPHAESTUS isn’t really the forge. It’s more like the knowledge of craft and ingenuity of a master smith, to wield the hammer. Encoded as software. Virtual creativity made real.

GAIA’s already learning. In simulation, she’s doing some very creative things with fractal assembly and animal morphologies. Her designs aren’t about to win the Li-Em prize anytime soon, but hey, everyone has to start somewhere! So… Yes. Time to get started. Let’s do this."
―Margo Shĕn

"Welcome to APOLLO – the collective memory of the human species, and the wellspring of knowledge for future generations. I am Samina Ebadji. Until recently, I was Director of the International Collective Memory Institute in New Tehran. As a heritage professional, I devoted my career to the preservation of human knowledge, creative endeavor, and cultural achievement. APOLLO is, therefore, the ultimate embodiment of a lifelong passion – albeit, under the very worst circumstances imaginable.

The challenges before us are immense. Specifically, we will have to design and implement four major initiatives simultaneously. First. The construction of data repositories in Cradle facilities around the world, ensuring redundancy. Second. The collection and processing of a projected 180 million discrete data entries – forty-two zettabytes of data – in Mandarin, English, Spanish, and Arabic. Third: the transferal and encoding of all that data onto DNA encapsulated in synthetic fossils, the only medium capacious and durable enough to safeguard it without degradation for the centuries to come. And last, but not least: The development of the holographic interface and gamified curricula by which future humans will commune with APOLLO, progressively unlocking heuristic learning modules… “leveling up” the knowledge and skills they will need to take control of the terraforming system. That is the future towards which all of our efforts will be directed. Not just the preservation of the past but the seed for the flourishing of a new tree of knowledge. Welcome. And let us begin."
―Samina Ebadji

"Welcome to HADES – Zero Dawn’s “extinction failsafe protocol” – the ultimate killer app! Now I know what you’re thinking. The purpose of GAIA is to resurrect life. So why give her a subordinate function, only purpose of which is to wipe life out all over again? I mean – what the what?! Just plumb crazy, ain’t it? Well no, it isn’t. Reconstituting a biosphere? That’s a tall order. Tack-smart as GAIA may be, odds are she won’t get it right the first time. I mean, imagine you’re GAIA, two hundred years from now, and this new biosphere you’re growing, it’s all gone wrong. Alkalines are skyrocketing, coniferous forests eroding under the lash of super-storms that would’ve drowned Noah. It’s chaos, a spinnin’ top that won’t stop wobbling. Now, what you gonna do? Release phase 1 organisms into that hot mess? Hope their CO2 and methane can balance out what you got started? Hell no.

What you’re gonna do, GAIA, is step aside while HADES takes over and does what you’re just too darn nurturing and life-loving to do. Which is burn that misbegotten mess of a biosphere to the ground so GAIA can start over. Okay, not burn. More like reverse terraforming operations and suffocate it. But you get the idea. HADES takes the biosphere back to zero, square one, blank slate. And then, only then, does it hand the steering wheel back to GAIA and say: 'try again, ol’ girl – and better, this time, or we’ll have to do this again.

That’s HADES. It’s pretty badass when you think about it. Extinction on demand, death on speed dial. All for the greater good, of course, but still – kinda metal! So – welcome to HADES. Welcome to the void!"
―Travis Tate

"Welcome to ELEUTHIA, the crown and king of GAIA’s subordinate functions, for it is by ELEUTHIA that the human race will continue to exist. I am Patrick Brochard-Klein, the Alpha in charge of this program. Now, let one thing be perfectly clear from the outset: ELEUTHIA is not a genetic engineering project. Our goal is to preserve the human genome, not alter it. A snapshot of human genetic diversity, literally frozen in time – the genetic quintessence of our species, unmodified.

Under my watch, our activities and initiatives will comply with the 2034 Clone Provisions and the 2048 Raleigh Accords. Now, that may seem a quaint, even trivial concern to you, in light of present circumstances, but as one of the authors of the Accords, it is far from trivial to me.

The practical challenges before us are… staggering in scope and complexity. But not insurmountable. Global collation and provisional storage of zygotes; perfection of exogenic technologies; design and perfection of servitors to provide nurture and inculcation during early child development; all of these program components must and will proceed in tandem – to say nothing of the breakneck construction of Cradle facilities at sites around the world. So… Si vous êtes prêts, let us begin."
―Patrick Brochard-Klein 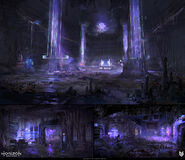 HEPHAESTUS ruin inside the facility

ELEUTHIA ruin inside the facility

ARTEMIS ruin inside the facility

POSEIDON ruin inside the facility

MINERVA ruin inside the facility

AETHER ruin inside the facility

DEMETER ruin inside the facility

APOLLO ruin inside the facility

HADES ruin inside the facility

Add a photo to this gallery

Retrieved from "https://horizonzerodawn.fandom.com/wiki/Zero_Dawn_Project_Facility?oldid=45936"
Community content is available under CC-BY-SA unless otherwise noted.