The World of Horizon Zero Dawn is filled with many diverse, beautiful environments and locations. Cities such as Meridian and Sunfall are where Aloy can find new quests and characters to interact with. The environments consist of rich jungles in the south, cold forests and fields on the mountains and hilltops in the east, and an arid and dusty desert-like plateau in the middle and northern parts of the map.

Aloy can also use the map to fast travel between certain places like Settlements, Gates, Hunting Grounds, Campfires, and landmarks such as Rost's Grave. It also includes information on location such as Ruins, Cauldrons, Machine Sites including Tallnecks and Corrupted Zones, Quests, Errands, and Collectables including Vantage Points, Ancient Vessels, Metal Flowers, and Banuk Figures.

The game world is located in what was previously Colorado, Utah and Wyoming. Vantage points reference real world locations such as Denver, Colorado Springs, and Bryce, UT. Locations such as Lake Powell and Bridal Veil Falls are directly based on their real-life counterparts, while the Air Combat Academy, the Sterling-Malkeet Amphitheater, and Denver Stadium take inspiration from real-life locations.

In the game, the scale of the area is drastically reduced to only a few square miles; however, based on the locations in real life, the area would stretch across several hundred miles, spanning from Bryce Canyon in Utah in the west to Denver, CO in the east, and from Cheyenne Mountain in the south to Yellowstone National Park. It is also impossible for drastically different environments to exist within a few miles of each other. Guerrilla Games stated that the reason for the massive scaling down of the world was to provide a dense gameplay experience.

Nora, Carja/Shadow Carja, and Oseram settlements have road signs. These road signs do not appear in Longnotch or The Cut.

Mother's Watch
Add a photo to this gallery

Sunstone Rock
Add a photo to this gallery

Pitchcliff
Add a photo to this gallery

Hunter's Gathering
Add a photo to this gallery

The world of Horizon Zero Dawn including The Cut, which was added with The Frozen Wilds 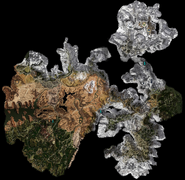 HZD + TFW map mostly filled in
Add a photo to this gallery
Retrieved from "https://horizonzerodawn.fandom.com/wiki/World?oldid=44851"
Community content is available under CC-BY-SA unless otherwise noted.