"I'm not one of your sisters. No woman can wear Carja armor."
―Janeva

Janeva is a minor character in Horizon Zero Dawn, and is the warden of the Carja prison known as Sunstone Rock.

When starting out as a soldier, rumors about Janeva's gender circulated among the other Carja. In response, Janeva threatened to break their arms, which proved effective at shutting down the soldiers' gossip "once enough arms had been broken."

Janeva eventually joined Sun-King Avad's honor guard, and was later assigned to the position of warden at Sunstone Rock. Avad noticed that Janeva generally believed criminals were beyond saving, thus he personally appointed Janeva to command the prison as a lesson in the power of rehabilitation.

After clearing out the Behemoths attacking Sunstone Rock, Aloy enters the prison and speaks with Warden Janeva, who informs her that three prisoners from the isolation chambers escaped during the machine attack. Janeva offers a bounty for each of them and reveals what little information they know about their possible whereabouts. 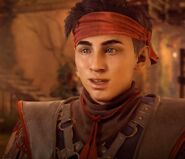 Add a photo to this gallery
Retrieved from "https://horizonzerodawn.fandom.com/wiki/Janeva?oldid=43643"
Community content is available under CC-BY-SA unless otherwise noted.