Daradi is a minor character in Horizon Zero Dawn. She is a young Carja noble whom the Nora Brave Aloy met at the former's family estate.

When their estate was attacked by machines, her father locked her in a room to protect her, before being subsequently killed by the machines.

Daradi was eventually found and rescued by Aloy, who had come to the estate upon hearing of the machine attack. By this point, Daradi was the sole survivor of the attack.

After investigating further, Aloy found a Machine Lure in the estate's shed, which she promptly disabled. Daradi was informed of the development, and asked if her father had any enemies. Daradi's answer was her brother Ranaman, explaining that he had been disowned by their father after turning to crime. Aloy deduced that Ranaman, who had informed her of the machine attack, had planted the lure to kill everyone on the property in order to claim it for himself.

Ranaman appeared soon after, carrying another lure in order to kill Daradi and Aloy. While Ranaman was ironically killed by the Glinthawks he summoned, Daradi escaped to the refuge of the house while Aloy killed the machines. Giving Aloy a Remarkable Reward Box as thanks, Daradi left the estate soon after, feeling that it was no longer safe to remain. 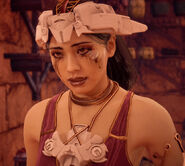 Outfit
Add a photo to this gallery
Retrieved from "https://horizonzerodawn.fandom.com/wiki/Daradi?oldid=44976"
Community content is available under CC-BY-SA unless otherwise noted.